Nova Ukraine expresses gratitude to Kanat Ibragimov for his donation of the gold painting “Bird and flowers”. Kanat is a long term supporter of Nova Ukraine,  a passionate activist, and a true friend of the Ukrainian people.

Kanat Ibragimov one of the Kazakhstan’s first conceptual artists.

He was born in Almaty, Kazakhstan. Studied in Almaty Art College in 1981-1985. Graduated Theater and Art Institute in Almaty Kazakhtan in 1992.

Artist’s portrait  was well described by famous curator and political writer Marat German: “ I think Kanat is a very important missive of Kazakhstan. He is demonstrating that freedom is possible. Accuracy and sincerity  of his statements, even in his disputable works inspire respect. But his essence also in his devolution to art, his loyalty.  Put crudely if Khanat is not fine with something in his life, culture, politics, he does not pretend that there is not a problem. He is blatant artist, he is aspiring to find a balance between of possibility and desire, a standard impossible for the most to achieve.  The stakes are high. Theloss is practically inevitable. But the victory, if it ever happens, is going to be slashing”.

Back in his homeland, Kanat Ibragimov has been one of the most fervent critic of Nurultan Nazarbayev’s regime, that have ruling for 23 years. Kanat was a “threat” to the regime by his art, his galleries, campaigns, publications, speeches he gave on meetings.  He was detained and tried three times for the duration of 15 days of administrative arrest, because of his participation and his speeches in protest rallies against the shooting of oil workers, that happened on December 16th 2011 in Zhanaozen.
His galleries, art performances, campaign events were held in Austria, Indonesia, Germany, Singapore, Thiland, Japan, Kyrgyzstan, Lithuania, Gorgia and Kazakhstan.
Retrospective personal exhibition of Kanat Ibragimov was held in gallery “Tengry Umai” Almaty. According to the curator V.Filatov “Show room was packed as sardines, and that is the first Kazakhstan artist that attracted so much attention”

Kanat Ibragimov has been living and working in California since January 2014.

His work and his publications could be found on his personal website www.kokserek64.wix.com/kanatibragimov 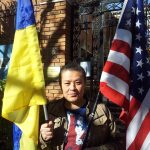 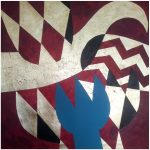